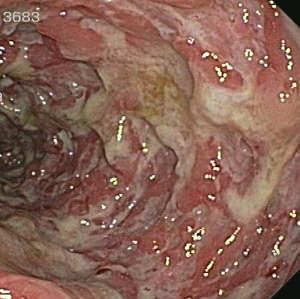 Inflammatory bowel disease (IBD) is a chronic inflammatory disorder potentially affecting any portion of the gastrointestinal tract from the mouth to the anus and characterized by relapses and remissions. It afflicts an estimated 500,000-2,000,000 people in the United States. The incidence of IBD is approximately equal in men and women. Most research has found the age of onset in adolescence and young adulthood, although there is a second peak incidence between the ages of 50 and 60. IBD is classified as two major disease entities:

• Ulcerative colitis (UC) is a mucosal inflammation that affects only the colon; it may involve the entire colon or only the distal colon/rectum. Its characteristic feature is diffuse, symmetric ulceration of the colonic mucosa, extending proximally from the rectum. The severity of the inflammation can vary, and is reflected in the degree of granularity, friability, bleeding and exudation. Bloody diarrhea associated with mucosal inflammation is a classic symptom: Other symptoms include urgency, tenesmus, weight loss, fatigue, fever and night sweats.

• Crohn’s disease (CD), in contrast to UC, can affect any segment of the gastrointestinal tract. It most often presents in the ileum (ileitis), the ileum and the colon (ileocolitis) or colon alone (Crohn’s colitis). 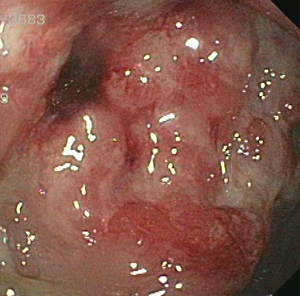 Patients with CD typically have diarrhea, abdominal pain and weight loss; bleeding also often occurs. The clinical course of CD varies from one patient to another, and is dependent on factors such as the portion of the alimentary tract that is affected and the intensity of the inflammatory processes. Although exacerbations and remissions are difficult to predict, nearly all patients experience a recurrence within 10 years of the first episode.

Mouth sores also known as aphthous stomatitis may develop during flares of Crohn’s disease or ulcerative colitis. These lesions are most commonly between the gums and lower lip or on the sides and underneath the tongue. These lesions are typically painful. 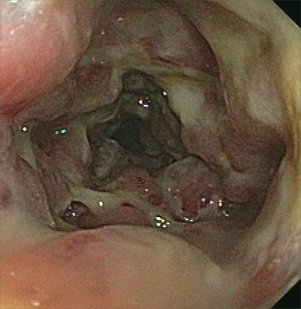 Skin lesions most commonly affecting the lower extremities may occur. Erythema nodosum manifests by a red or violet discoloration that is often painful to the touch. Subcutaneous nodules may also be present. Erythema nodosum is thought to represent a delayed hypersensitivity reaction. A second less common skin lesion is Pyoderma gangrenosum. In this disease tissue becomes necrotic causing deep ulcers that usually occur on the legs.

Eye inflammation known as uveitis or scleritis occurs in up to 5% of those with Crohn’s disease or ulcerative colitis. The symptoms of uveitis include floaters in the vision, eye pain, and sensitivity to light. Scleritis is manifested by burning and itching of the affected eye (one or both eyes may be affected).

Liver disease, specifically a condition known as primary sclerosing cholangitis (PSC) is increased in inflammatory bowel disease, in particular ulcerative colitis. PSC may be asymptomatic and only suspected based on abnormal blood testing (elevated bilirubin & alkaline phosphatase). PSC may also result in symptoms such as yellowing of the skin (jaundice) eyes (scleral icterus) and itching. Eventually PSC may result in liver failure. 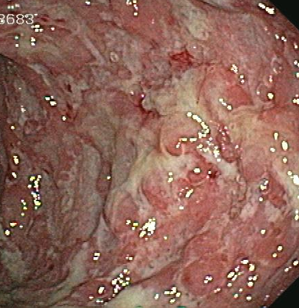 There are numerous treatment approaches to inducing and maintaining remission in patients with IBD. These treatments may be divided into several classes:
1. Corticosteroids: Although useful in inducing remission, they have not been shown to maintain remission. The side-effects of prolonged use of corticosteroids are quite daunting. These include not merely weight gain and water retention, but susceptibility to infection, adrenal gland suppression, aseptic vascular necrosis of the joints, cataracts and osteoporosis. Moreover, while high dose intravenous steroids can induce remission, their efficacy is decreased if the patient has been treated with oral steroids. Lastly, patients may develop not only steroid-induced IBD (inability to taper off steroids without inducing an exacerbation), but steroid dependent IBD (no response to re-administered or increased doses of steroids) as well.
2. Five Amino Salicylic Acid (5-ASA) Product: The original 5-ASA product was sulfasalazine. Sulfasalazine is a drug with an active part bonded to an inactive part. When ingested orally, sulfasalazine is largely unabsorbed from the small intestine and delivered intact to the colon, where the bond is split by bacteria to release the 5-ASA, which acts topically on inflamed colonic mucosa. It may act by one of the following mechanisms: Inhibiting leukotriene synthesis, inhibiting granulocyte activation or scavenging reactive oxygen metabolites. Newer 5-ASA preparations include Asacol, Colazal, Lialda MMX (multi-matrix system) mesalamine,  Pentasa and Dipentum) have different areas of distribution and activity and fewer side-effects. Moreover, enema & suppository forms for distal proctitis exists (Rowasa, Canasa). Recurrence rates may drop by 40-60% in IBD patients using these products.
3. Antibiotics: Metronidazole remains a useful drug in the treatment of colonic and perineal Crohn’s disease and pouchitis. Dramatic healing may be seen in perianal disease, rectovaginal fistulas and complex perineal abscesses. Toxicity is common and long-term efficacy is debated.
4. Immunomodulatory Agents: Some patients with IBD do not respond to steroids and 5-ASAs. In refractory cases, azathioprine and 6-mercaptopurine are used. These agents may be used to decrease and eliminate steroids and to maintain remission. These medications take 3 months to achieve optimal therapeutic benefit. Exacerbations in patients taking these medications tend to be milder. A recent study revealed that post resection patients stay in remission longest when treated with 6-mercaptopurine as opposed to those treated with a 5-ASA product or a placebo. The study did not compare those treated with both 6-mercaptopurine and a 5-ASA product versus treatment with a single agent. The duration of treatment is debated. Nevertheless, one ongoing study seems to point to continuous treatment as opposed to stopping the drug after 5 years.
5. Cyclosporine is a potent immunosuppressive agent often used in organ transplant recipients. Intravenous cyclosporine has been used in severe refractory ulcerative colitis to prevent or delay colostomy. Although the onset of action is quick (within 14 days), the long-term efficacy in an oral form is disappointing. It can be used as a bridge while awaiting the onset of action of 6-Mercaptopurine. It may also be of use in patients with fistulous Crohn’s disease.
6. Methotrexate may induce remission. However, the duration is limited in contrast to that of 6-mercaptopurine.
7. Monoclonal antibody therapy includes Infliximab (Remicade®), Adalimumab (Humira®), Certolizumab pegol (Cimzia®), and Natalizumab (Tysabri®) are intravenous infusions or subcutaneous injections of a monoclonal antibody which are approved for use Crohn’s disease patients, as well as patients with fistulous Crohn’s disease. Infliximab (Remicade®), also has FDA approval for use in ulcerative colitis. Trials to date reveal a significant improvement in these patient populations after having been given one to three administrations of these medications.

In summary, IBD is a spectrum of illnesses that are characterized not merely by abdominal pain and diarrhea, but a significant decrease in quality of life. With strict compliance to medical therapy and regular follow-up with your Borland Groover provider you can increase your chances of controlling this disease.

<< Back to Gastroenterology Education Articles

More physicians and locations throughout the region mean faster appointment times for you. Schedule your visit today.