March is colorectal cancer awareness month. This means an emphasis on the message "get screened for colon cancer" from both primary care physicians and the physicians of Borland Groover Clinic. If a person is 50 years old, or an African-American who is 45 years old or older it is time to schedule the first screening colonoscopy. 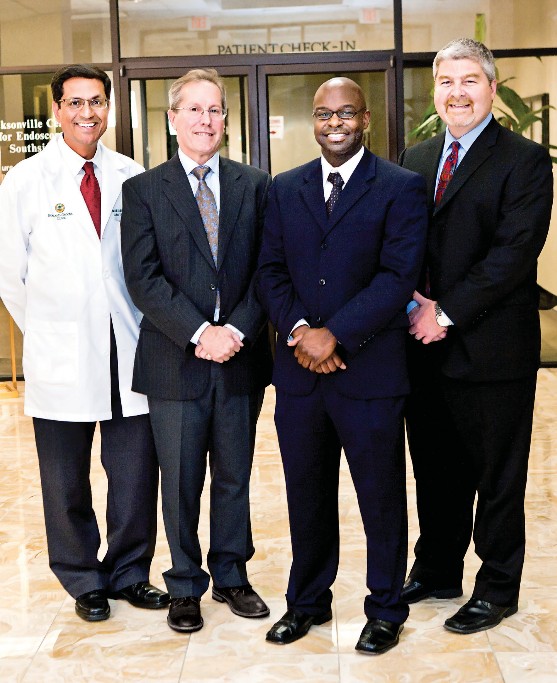 "The data is on our patients' side," says Bharat Misra, M.D., of Borland-Groover Clinic. "Colon cancer can be prevented with screening colonoscopy if polyps are found early," he explains. The obvious challenge is to successfully reach a healthy patient with no gastrointestinal symptoms about the importance of undergoing a colonoscopy. "We take healthy 50 year olds and recommend a somewhat invasive procedure; it can be an uphill battle," says Dr. Misra. And that's where the teamwork between the primary care physicians and Borland-Groover Clinic becomes essential; proactive primary care physicians encourage screenings and refer those with a family history or symptoms for a diagnostic colonoscopy.

"The primary care physician has built a rapport and trust with their patients. When they suggest a colonoscopy to an eligible patient, often the compliance is high."— Bharat Misra, M.D.

"This is the time of year that we really drive home the message that we strive to share all year," says Renard Rawls,M.D., of the Borland-Groover Clinic."

The facts are attention-getting and hopefully spur those eligible for a screening colonoscopy into action. This year approximately 150,000 will be diagnosed with colon cancer and about 50,000 people die annually from the disease. It affects six percent of the American population. It can be a silent killer and people can get diagnosed with colon cancer without having a single symptom – another compelling reason to have that baseline screening at age 50, or ten years younger if when a family member was diagnosed.

Progress is being made in the numbers. "We used to have about a third of the population who would come in for screening," says Akin Cabi, M.D., physician at Borland-Groover Clinic. "Now we have about 50 percent of those eligible who are being screened annually." He also believes that by sharing personal stories about having a screening colonoscopy can be presented in a positive way; such stories go a long way in convincing someone to have a screening colonoscopy. Dr. Cabi's father passed away from colon cancer while Dr. Cabi was still in medical school. "My dad had received the flexible sigmoidoscopy test, which was a standard test at the time," recalls Dr. Cabi. "I urged him to have the colonoscopy but by then it was too late," he says. He shares his story with his patients to illustrate to them that early detection is the key to curing colon cancer.

"Gynecologists are very proactive with their patients and often incorporate an annual rectal exam as part of the exam process," says Dr. Hoffman. Women tend to have a close and trusting relationship with their gynecologist so when the referral for a colonoscopy is suggested it is usually followed up by the patient.

The good news for patients with a normal screening colonoscopy is that the procedure doesn't need to be repeated for ten years. "The growth sequence from polyp to cancer is usually slow – about five to ten years," says Dr. Misra. "Three out of four men and five out of six women will have a normal examination at their first colonoscopy and can wait for ten years to have their next colonoscopy," he adds.

Because Borland-Groover Clinic is largely a referral practice, it has strong lines of communication with referring physicians. The patient's diagnosis, treatment, and recommendations for care are shared with the primary care or referring physician so that all healthcare providers involved are a part of the team of care.

"Once the primary care physician refers the patient, Borland-Groover takes the ball and runs with it," says Dr. Misra. "Today's healthcare process is often fragmented with much paperwork, but we have one phone number and one fax line to make the referral process easy. We even handle the insurance aspect," he explains.

"The relationship between us and our patients remains crucial for the return surveillance colonoscopies as well," says Dr. Rawls. Patients receive reminders from both their primary care physicians and Borland-Groover, so it is easy to see which patients are following up and which aren't. "Few patients would just come in on their own – they need that extra nudge," he says.

"Of course if symptoms are present, patients don't need the nudging," says Dr. Misra. Symptoms can appear at any age and regardless of a young age, those symptoms should be taken seriously. "That is also where family history is important to know. But even without a family history sporadic colon cancer cases can occur at any age. That's why we all need to treat each patient on an individual basis," says Dr. Rawls.

Borland-Groover physicians practice in state-of-the-art facilities and strive to provide a pleasant environment for the patient with a well-trained, knowledgeable, and courteous staff. "We know that our patients are nervous about the procedure," says Dr. Misra. "We have a competent and caring staff with nurses who maintain the dignity and modesty of the patients," he adds. The pre-procedure bowel prep is easier than it has been, the patient is under a light anesthesia during the procedure and usually isn't aware of the colonoscopy, and patients usually go home about 30 minutes after the procedure and resume normal activities the next day.

Additionally, Borland-Groover physicians practice in the best hospital systems locally with highly trained hospital personnel where their patients receive premier care. "Patients who were never offered a screening colonoscopy, but who are diagnosed with colon cancer because they come to us with symptoms, are never happy about that," says Dr. Misra. We have clearly defined procedures and treatment care, physician to physician care can lead to better outcomes and the combined partnership is leading the way to a healthier community.

More physicians and locations throughout the region mean faster appointment times for you. Schedule your visit today.