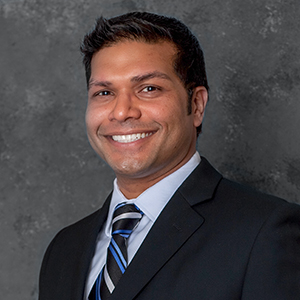 Dr. Gopal is a rare Jacksonville native. He was born and raised on Jacksonville’s Westside. After graduating from Stanton College Preparatory School, Dr. Gopal attended Emory University in Atlanta, Georgia for his Bachelor of Science in Biology. In the summer of 1996, Dr. Gopal was one of four inductees into the Emory University College Hall of Fame, the highest honor bestowed upon an Emory graduate. He continued on to Emory University’s School of Medicine. While in medical school, Dr. Gopal was selected for the 2000 Evangeline T. Papageorge Award for outstanding service to his class. He served as President of his medical school class for the third and fourth years.

From Emory, he moved down to Gainesville, Florida where he completed his internship and residency at the internal medicine department at the University of Florida. While in Gainesville, Dr. Gopal earned two Outstanding Resident Teaching Awards. He later joined Wake Forest University in Winston-Salem, North Carolina for his sub-specialty fellowship in gastroenterology and hepatology. In his final year of a three year fellowship program, Dr. Gopal was appointed chief fellow for the 2005-2006 term.

Dr. Gopal returned home in July of 2006 to start practice at Borland Groover. Dr. Gopal is interested in all aspects of gastroenterology and hepatology but has special interests in hepatobiliary work, treatment of Barrett’s esophagus and prevention of colorectal cancer. Dr. Gopal’s office is in our Southside location. His hospital practice is primarily based at the Baptist Medical Center’s Downtown campus.

He has served on the board of The American Cancer Society and The American Heart Association. Dr. Gopal is a trustee of the Baptist Health Foundation.

Dr. Gopal is the Baptist Downtown Magnet Spirit Award, Physician of the Year winner for 2012 and 2014. Dr. Gopal was the second runner up for the beaches fine arts series 2016 First Coast Dancing with the Stars Competition. He raised over $14,000 for the arts program for local children.  In 2017, Dr. Gopal graduated from the F.B.I. Citizens Academy, Jacksonville Chapter.  Jacksonville Magazine has named Dr. Vikram Gopal, as one of the city’s “Top Docs” for multiple years.

Dr. Gopal is happy to see all patients, even though there is a long wait time to see him. If you cannot wait please request to see his Physician Assistant, Kristen Dixon. Kristen has been practicing Gastroenterology since 2004 and began under the direct supervision of our founder, the late Dr. Jack Groover.